by admin
Based on the “art of archery” is an East Asian martial art form known as Kyudo. This “archery” based combat form is said to have originated from Japan. Apparently, this form of martial art has developed from within the “Samurai class” that existed in the feudal Japanese society. In addition, this unique “archery” based martial... Read More

Based on the “art of archery” is an East Asian martial art form known as Kyudo. This “archery” based combat form is said to have originated from Japan. Apparently, this form of martial art has developed from within the “Samurai class” that existed in the feudal Japanese society. In addition, this unique “archery” based martial art form is supposedly practiced by thousands of people around the world. Furthermore, the International Kyudo Federation as of 2005 comprises of approximately 132,760 officially graded members.

a. History/origin of the Kyudo:

The history/origin of Kyudo can be categorized into “five” critical phases as follows:

1. The Development of Kyudo as a martial art form:

The “Kyudo” as form of martial art was created when Japan as a society was undergoing a transition and the military class i.e. the Samurai clan was gradually acquiring power. As a result of which, a demand for an “archery based” martial art grew, and this was the major reason why Kyudo was developed.

It was during the 15th and the 16th centuries that Japan was affected badly by a civil war. And so yet again there arose a demand for an evolved “archery based” combat form. Furthermore, it was in response to the high demand that a warrior named Heki Danjō Masatsugu created an evolved archery martial art form referred to as “hi, kan, chū” which means “fly, pierce, and center”. In addition, many schools teaching this form of evolved archery were opened in the country during this period. In fact, some schools such as Heki-ryū Chikurin-ha, Heki-ryū Sekka-ha and Heki-ryū Insai-ha exist even today.

3. The arrival of the Portuguese in Japan during the 16th century:

“Yumi” (i.e. a Japanese bow) was very popular in the Japanese society until the Portuguese arrived in the country in 1543. Furthermore, they brought with them a form of ammunition known as “matchlock”.  Having observed the “matchlock” from close quarters the people of Japan created their own version in the form of “tanegashima”. It was then that the Japanese matchlock became popular and along with the spear i.e. known as yari, which resulted in a rapid decline in the use of Kyudo.

It was during the beginning of the 17th century in the “Edo Period” that the Samurai clan (i.e. warrior class) had acquired power. As a result, learning archery was made a “voluntary” skill which was practiced mainly in the court as a part of a ceremony, which resulted in further rapid decline in the use of Kyudo.

5. The Resurrection of Kyudo as a martial art form:

Similar to what Jesus Christ experienced, Kyudo too as a martial art form was “resurrected” from the dead during the “Meji Era” which started in 1868 and ended in 1912. It was apparently during this period that Japan as a country opened up its shores to the outside world. It is this opening up that led to the end of the power of the “Samurai” clan which led to many Kyudo masters getting together to resurrect the art of archery which was dead.

b. Weapon used in the Kyudo:

Since this combat form is based on archery, the weapons used mainly include “Bow and arrows”.

c. Technique involved in the Kyudo and training availability:

As for technique, Kyudo is based on a philosophy called “shin-zen-bi” (roughly meaning “truth, goodness, and beauty”). Now, according to this philosophy when an archer shoots an arrow with precision along with the right spirit and attitude the result obtained is usually said to be extremely beautiful. Furthermore, while shooting the archer usually holds the bow in the left hand and draws the string using the right hand. As for training centers/schools, there are many available especially in Japan for all those interested in learning this rare “archery” based martial art form. 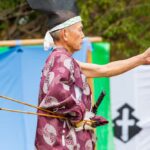 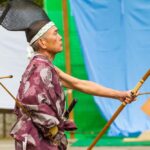 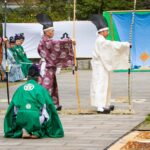 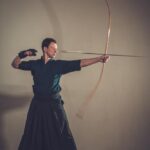