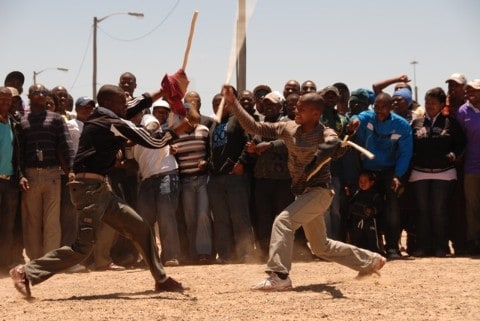 “Playing sticks” is the literal translation of a form of African martial art known as Nguni Stick Fighting. This “traditional” form of martial art is said to have originated in South Africa and belongs to the “Nguni” community. Apparently, this form of martial art is commonly practiced by teenage “herdboys” belonging to the Nguni community within this southern African country. Furthermore, famously Nelson Mandela during his childhood is supposed to have acquired skills in this form of “stick fighting”.

a. History/origin of the Nguni Stick Fighting:

b. Weapons used in the Nguni Stick Fighting:

The weapons mainly used in this form of martial art are two long sticks. So while one stick is used for “defense” the other is used to “attack”. In addition, a small armor is also used.

c. Concept and technique used in the Nguni Stick Fighting and training availability:

In terms of technique, the fighters are initially armed with two long sticks for “defense” and “attack” respectively. They then fight each other using the sticks to determine the stronger of the two.  Furthermore, the fighter who proves to be the strongest is called the “Bull” or locally referred to as “Inkunzi”. As for training centers/schools, since this form of “traditional” martial art is mainly practiced within South Africa (especially by the Nguni community) there are no schools/training centers available around the world.