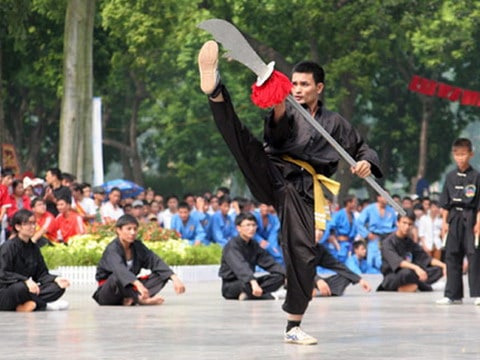 Also known as “Vo Binh Dinh” is a Southeast Asian martial art form known as Vo Thuat Binh Dinh. This “regional” martial art form is said to have originated from a province known as “Tinh Binh Dinh” located in Vietnam. Apparently, all combat forms practiced in the Tinh Binh Dinh Province is said to be Vo Binh Dinh/Vo Thuat Binh Dinh. Furthermore, there are about 11 huyen (i.e. counties or districts) within this province that practice this style of martial art.  In addition, a uniform generally comprising of a black robe is worn while practicing this combat style.

a. History/origin of the Vo Thuat Binh Dinh:

According to the cultural history of Vietnam, any form of martial art that is practiced within villages located in a province known as “Tinh Binh Dinh” is termed as Vo Thuat Binh Dinh. It is also commonly referred to as Vo Binh Dinh. Apparently, a village like An Thai is popular for martial arts using bare hands, while the Thuan Truyen Quyen Village is known for its use of a combat form that basically uses a staff as weapon. In addition, a comprehensive list comprising of 18 weapons are made use in this form of combat.

b. Weapon used in the Vo Thuat Binh Dinh:

There are 18 basic weapons used in this combat form and they include:

In terms of technique,  some villages in the province of Tinh Binh Dinh use a version of Vo Thuat Binh Dinh that make use of empty hand techniques, while a few others make use of a wide range of weapons. As for training centers/schools, there are a few available mainly within the Binh Dinh province in Vietnam for those interested in learning this “regional” martial art form.