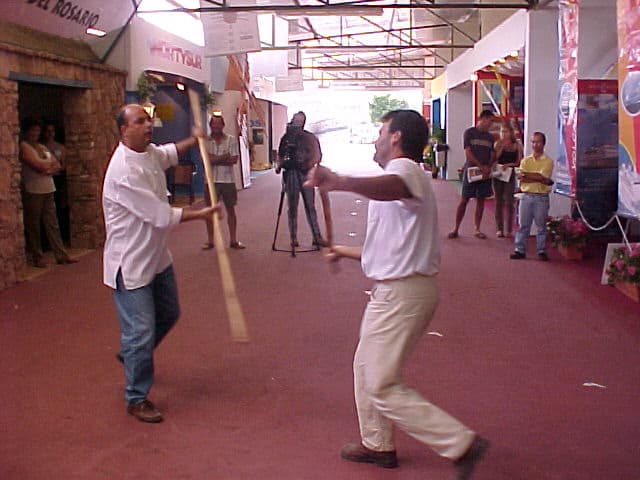 by admin
“Game of sticks” is the literal translation of a West European martial art form known as Juego Del Palo. This “weapon” based combat style is said to have originated from the Canary Islands located in Spain. Furthermore, the Juego Del Palo involves the use of a pair of slender sticks. In addition, this combat form... Read More

“Game of sticks” is the literal translation of a West European martial art form known as Juego Del Palo. This “weapon” based combat style is said to have originated from the Canary Islands located in Spain. Furthermore, the Juego Del Palo involves the use of a pair of slender sticks. In addition, this combat form also involves the use of fluid movements both in “attack” as well as in “defense”. It is also said to be extremely similar to combat styles used in the Philippines.

a. History/origin of the Juego Del Palo:

According to the cultural history of Spain, the Juego Del Palo (similar to Canarian wrestling) was developed by a community known as “Guanches” located in the Canary Islands. Apparently, it was a Spanish engineer by the name of Leonardo Torriani who recorded the history of the islands in the year 1590 in which he described the early version of Juego Del Palo in details. Furthermore, in his record Torriani explained in details facts about the Juego Del Palo using the following paragraph.

“When two Canarians went to duel, they met at a special place established for this purpose. It was a small enclosure with a level, raised stone platform at each end. To begin, they each stood upon a platform, armed with three of the smooth throwing stones they call tahuas, and also with the stick called magodo or amodeghe. Then they dodged the stones as they were thrown, skillfully twisting their bodies without moving their feet. Next, they stepped down and fenced with the staves, each one trying to gain advantage over the other, as is our custom also”.

In addition, so as to describe this combat form he also included an pictorial image that showed two Guanches warriors practicing this combat style. It was eventually in the 1970’s that this combat form began evolving since the people belonging to the islands intended to maintain the rich Canarian folk traditions.  It is said to be extremely similar in style to the Jogo Do Pau (Portuguese martial art form) and Jeugo Del Garrote (Venezuelan combat form).

b. Weapon used in the Juego Del Palo:

The weapon mainly used in this combat form is a pair of slender sticks each measuring about 1.2 to 1.8 meters in length.

In terms of technique, the Juego Del Pato basically involves the use of “stick fencing” methods.  Furthermore, the fighter in this form of combat makes use of a mixture of “attacking” and “defensive” moves. In addition, all the moves (attacking and defensive) involved in this combat form comprises of fluid movements. It is said that safety in this style of combat is to be maintained by the restrained used of attacking moves. As for training centers/schools, there are few available especially in Spain for those interested in learning this “weapon” based combat form.