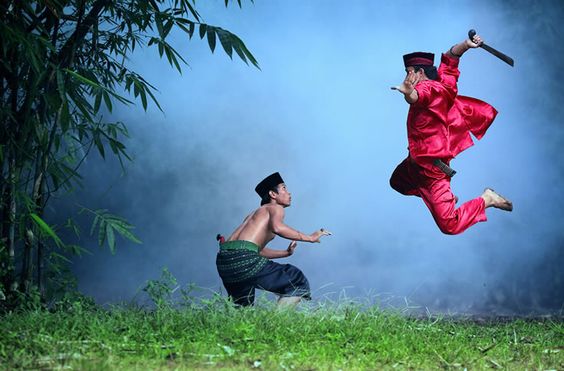 by admin
Commonly referred to as “silat tua Yawi” is a Southeast Asian martial art form known as Silat Pattani. This “weapon” based combat form is said to have originated from Thailand during the era of the Pattani Kingdom. Apparently, this form of combat is extremely similar to an Indian martial art style known as Gatka. Furthermore,... Read More

5 Most Lethal Martial Art forms in the world

Commonly referred to as “silat tua Yawi” is a Southeast Asian martial art form known as Silat Pattani. This “weapon” based combat form is said to have originated from Thailand during the era of the Pattani Kingdom. Apparently, this form of combat is extremely similar to an Indian martial art style known as Gatka. Furthermore, the Silat Pattani basically makes use of two basic concepts namely “Jantan Betina and Panchabuta”. In addition, this martial art form also consists of two major forms i.e. the Ramayana form and the animal form.

a. History/origin of the Silat Pattani:

According to the cultural history of Thailand, the Silat Pattani was said to have been developed during the Hindu-Buddhist era. It was created using four elements belonging to the Chinese Xingyiquan and several features belonging to the Hindu epic Ramayana. A popular folklore states that there existed once three Minangkabau warriors who belonged to West Sumatra. Now, one day based on instructions of their teacher they started on journey in the hope of seeking “enlightenment” i.e. moksha. It was during this journey that the warriors got involved in a bloody battle in close proximity to the Siamese border. Now, during this battle one of the warrior managed to escape (with wounds) into a forest. Once in the forest he followed a stream and found a waterfall where he could rest. It was in this waterfall that he noticed a presence of a lotus which refused to get pushed into the water and kept floating back. And so being curious he tried throwing a stick and stone at the lotus, but both these actions had no effect on the movement of the lotus. He therefore himself jumped into the water and tried slashing the flower, but on doing it the flower just flowed away from him. It was at this time that the warrior apparently heard a tree suggesting to him to learn from this episode and teach his other friends what he had learnt. And so he returned home analyzed the incident, and along with his other two comrades created a unique martial art form named “Silat Pattani”.  In addition, there are a few more legends that exist in the Thai culture that describe the origins of the Silat Pattani.

b. Weapon used in the Silat Pattani:

The “hands and feet” of the fighter are used as a weapon during unarmed combat, while the armed combat involves the use of five basic weapons. They are as follows:

c. Technique involved in the Silat Pattani and training availability:

In terms of technique, during an unarmed form of combat a fighter basically makes use of “empty hand fighting” moves such as punching and grappling to overcome an opponent. In addition, five basic weapons that include a machete and a spear may also be used by a fighter. As for training centers/schools, there are none available around the world for this essentially “weapon” based combat form.

COLLEGIATE WRESTLING- UNITED STATES OF A...