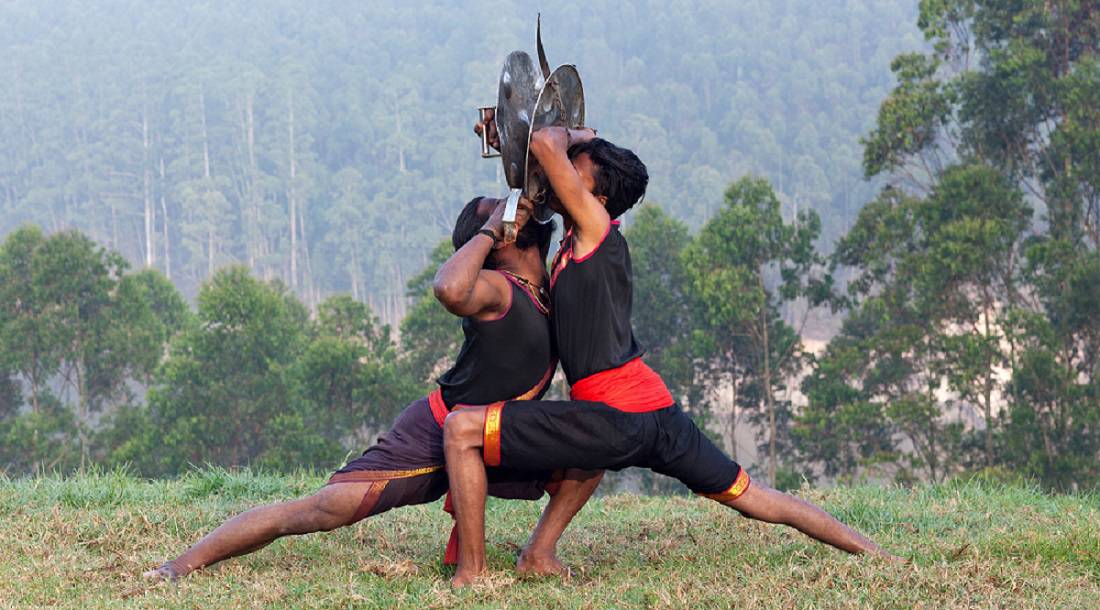 Why is “Kalaripayattu” a popular form of Indian martial art?

Kalaripayattu is an Indian martial art form that has originated from the state of Kerala supposedly about 3000 years ago. It is said that the word “Kalari” which means “battlefield”  was first seen in the “Tamil Sangam literature”, and was used to specifically describe a “combat arena”. Furthermore, this martial art form is to have... Read More

Kalaripayattu is an Indian martial art form that has originated from the state of Kerala supposedly about 3000 years ago. It is said that the word “Kalari” which means “battlefield”  was first seen in the “Tamil Sangam literature”, and was used to specifically describe a “combat arena”. Furthermore, this martial art form is to have been mainly developed within the northern and central regions in Kerala. Also, it is considered to be one of the “oldest combat systems in the word”, and is extremely popular in India. Now, there are many reasons as to why this martial art form is so famous in the country. So, here is presenting a few major ones.

The “Rich History” of Kalaripayattu:

“Practice in the arts of battlefield” is the literal translation of Kalaripayattu, an Indian martial art from that has originated from the state of Kerala centuries ago. Apparently, the first evidence which confirmed the existence of this combat form was seen in the Sangam literature that was written in between the 3rd century BC and 2nd century AD. Furthermore, the word “kalari” first makes it appearance in the verses of classic Tamil poetic works referred to as “Akananuru” and “Purananuru” respectively.  Apparently, it was also during the Sangam period that every soldier was trained in the use of weapons such as spear (vel), sword (val), shield (kedaham), and bow and arrow (vil ambu). It was the technique used in yielding weapons mentioned above that eventually became the one of the earliest “precursors” of the “kalaripayattu” form of combat.  It was eventually in the 6th century that this combat form developed into its current style. The evolution of this martial art form involved the incorporation of elements from the Yoga Sutras of Patanjali, finger movements from dances such as nata, kathakali, as well as the Chhau dance.

The focus on “postures and physical flexibility” in the training of Kalaripayattu:

“Steps and postures” are the key components of the training involved in Kalaripayattu. So, while the basic steps used in this martial art form are known as “Chuvatu”, the postures/stances used are known as “Vadivu”. Now, there are eight stances used in the combat style which differ drastically from one another.  In addition, these eight  postures are apparently named after animals, and each of them consists of their own style, power combination, function, and efficacy. This combat form also emphasizes on the need for “flexibility” as well as on the concept of bringing the body in sync with the mind.

The use of “Marmashastram”, “Ayurveda”, and “massage” in Kalaripayattu:

Identifying and attacking the vital point (known as marman) to either kill or disable an opponent is also taught in Kalaripayattu. This technique of accurately attacking the “critical point” of an individual is called”Marmashastram”. Furthermore, it also includes the involvement of marma treatment which is known as “marmachikitsa”. This method used to kill or disengage an opponent is mainly only taught to talented and level headed individuals.

The use of Indian traditional medicine i.e. Ayurveda as well as the use of massages also form an integral part of this martial art form. For example, many teachers of Kalaripayattu provide for massages known locally as “uzhichil” using medicinal oils so as to either increase the flexibility or to treat niggling muscle injuries of students. In case a student of this martial art form requires to increase flexibility then a special massage is known as “Katcha Thirumal” is provided. Most of the massages used in this combat form have been mainly derived from “Ayurveda”.

Kalaripayattu, an inspiration for Kathakali:

Such is the impact of  Kalaripayattu on the Indian culture that even Kathakali, a dance-drama art form has made use of  some of its techniques and massage treatments. In fact, it has been proven that kathakali dancers who have learnt a few techniques of Kalaripayattu have been more effective than those who have not made any effort to do so.

And so, it is simply basically because Kalaripayattu fuses elements belonging to yoga, meditation, Ayurveda, relaxation, and self-defense techniques, that it has over years become a very popular form of Indian martial art. ')}

Tao of Jeet Kune Do, A Must Read Martial Art Manual
Previous Post
How Does Martial Art Benefit Your Child?