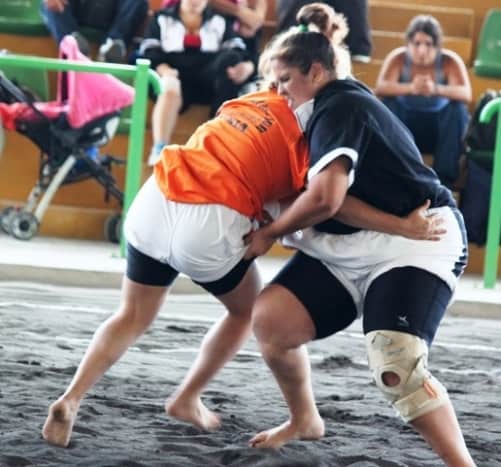 Also referred to as “Lucha Canaria” is a West European combat form known as Canarian Wrestling. This “grappling” martial art style is said to have originated from the Cannary islands located in Spain. Furthermore, the wrestlers usually fight in the center of a sand circle known as “terrero”. In addition, the primary objective of a wrestler in this combat form is to compel any body part (except the feet) of the opponent to make contact with the sand.

a. History/origin of Canarian Wrestling:

According to the cultural history of Spain, this form of combat was first developed by the natives belonging to the Canary Islands known as “Guanches”. Furthermore, it was in the year 1420 when the Spanish colonized this group of islands that a historian by the name of “Alvar García de Santa María” officially recorded this combat form, which included the “grappling” techniques used and the role of the referees. In addition, it was during the colonization era that this form of wrestling became extremely popular as a sport. It also eternally got linked to the culture of these islands, and hence is commonly practiced during celebrations and at local festivals. Apparently, the formal rules for this style of wrestling were for the first time created in the year 1872.  An organization known as “Federación Española de Lucha” was established in 1984 so as to manage Canarian wrestling as a sport.

b. Weapon used in the Canarian Wrestling:

The weapon mainly used in this style of wrestling are the “hands” of the fighter.

c. Technique involved in the Canarian Wrestling and training availability:

In terms of technique, the wrestler uses a method known as “mañas” to overcome an opponent. Furthermore, this technique called “mañas” comprises of a few essential moves. These moves are as follows:

In addition, the use of a few moves such as punching, hitting, and strangling are strictly prohibited in this style of wrestling. As for training centers/schools, there are a few available especially in Spain for those interested in learning this “grappling” style of combat.